After my own family’s recent experience of my mum being diagnosed with breast cancer I got a bit upset when I saw this feature today, as the news is still very raw, but I thought it was worth sharing.  TV presenter Amy Robach recently had a mammogram live on air to promote breast cancer awareness and encourage more women to be screened.  Shockingly her results came back positive and she is now undergoing treatment.  While Amy Robach looks impossibly calm and together while explaining her surprise to the cameras, I can only imagine what is going on beneath the surface both for her and her family.

I thought I was dealing ok with the news that my mum had been diagnosed with breast cancer.  After a few tearful days of struggling to talk about it at the beginning I thought that I had made peace with it in my mind.  I could discuss it with my friends in a calm, controlled manner without bursting into tears.  I could watch adverts about cancer or tv or news items about it without having to leave the room.  It was difficult, sure, but I thought the spirit of ‘just getting on with it’ had prevailed.  How wrong I was.

I think a big part of being relatively ok within a few days of getting the news was that nothing had perceptibly changed.  Sure, cancer was the elephant in the room but life unfolded as usual.  My mum went to work, my dad went to work, my sister went to university, I unpacked my suitcase.  Surgery was four weeks in the future (I’m still struggling with this one, always a kid with a preference for having the plaster ripped off quickly, a four week wait to have a cancerous tumour removed seems like an unfathomably long time.  This is MY MUM we’re talking about here guys, why can’t it come out TODAY!?)

In a decision that doesn’t sit particularly well with me, my mum has opted not to tell my elderly grandmother until after surgery, as my grandmother is not in great health herself and spends much of the day alone.  She thinks my grandmother can do without this worry until she absolutely has to know (eg. when my mum starts getting treatment and won’t be able to hide it).  My mum has also decided not to tell her sister – my aunt.  In terms of family I feel like there’s a wall of silence, and it has been making me very uncomfortable since I think my mum could be getting a lot of (much needed) emotional support from those people around her.  On the opposite end of the spectrum I wanted all my friends to know immediately, but of course I still have to keep if from my grandmother – which hurts.

Yesterday my mum’s friend came to visit as she has also recently been diagnosed with breast cancer (they are both around the same age and were picked up in the same round of screenings in our local area).  As this lady’s cancer was more advanced she has already had surgery and hence is a few steps ahead of my mum.  I don’t know if it was overhearing snippets of this conversation full of scary things like radiotherapy, the dreaded chemotherapy, tamoxifen . . . general treatment plan stuff, or if the encroaching date of the surgery is starting to play on my mind, but in the last 24 hours I’ve been one hot mess.  Cancer is now stepping out of the abstract in our house, and is becoming real.

I’ve lost control over my emotions, and it just feels like I am surrounded by cancer.  All of a sudden it seems like so many women not that far removed from me have it, and my mind has been wondering back to all of those friends I’ve had who have lost their mother’s to cancer over the years.  At this minute cancer looks a lot like something that only effects women.  This is a dumb observation obviously, but for me right now it just seems like a veritable plague amongst women over a certain age and I am scared.

In order to do something proactive I have booked an overdue cervical screening for myself, and I have untold paranoia and fear that something abnormal will result from this.  Guilt wouldn’t let me avoid doing it, certainly not at the moment, but there’s no guarantee that an irrational freak-out will not occur while waiting for results.

Having being generally tearful and unbalanced today the complete pièce de résistance came when I had an appointment that I had to reschedule.  The receptionist wanted to book an appointment for two weeks time, and was fairly forceful about this.  Two weeks time is the day my mum has surgery.  And while I tried to explain that even though I know they aren’t flexible about days I really couldn’t do that day etc etc. I properly broke down.  Along with the public embarrassment of this I am sad and upset that I’m not dealing with the bad news as well as I had thought.  Even afterwards I was completely scattered and distressed.  I didn’t know what to do to calm myself down or make myself feel better.  Should I have attempted to placate myself with coffee and cake?  Bought myself a dress to cheer myself up?  Called one of my friends, in one of those blundering phone calls where you don’t have anything to say but just want to hear a friendly voice – which inevitably then makes you cry a bit more?  I decided instead to first go to the bathroom to calm down and wash my face, only to be confronted with: cancer awareness posters!  It feels like there is nothing I can do to ‘escape’ or ‘forget’ because no amount of distractions are going to make my mum not have cancer.

All this being said my mum herself is currently looking distinctly unruffled, maybe Amy Robach is coping a lot better than my initial suspicions.  Whether this is acceptance, determination or denial remains to be seen . . . I’ll support my mum in any way that I can, and I’m eternally grateful to others who in turn are able to support me. 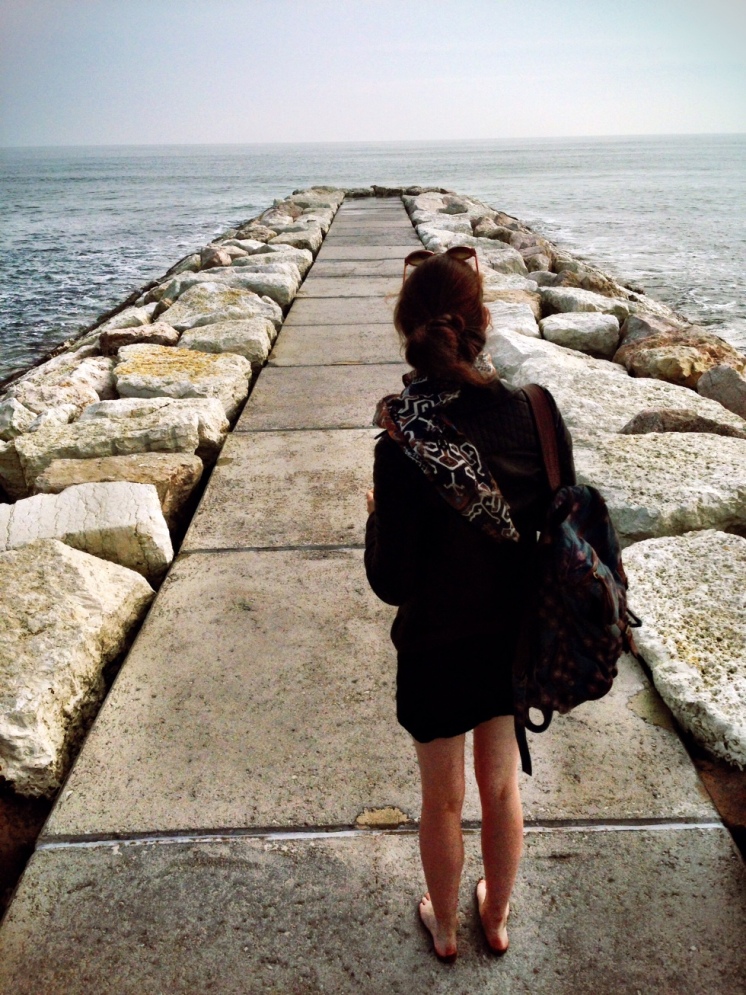 Lolling on Lido and worrying about my life

So, a lot of LIFE has happened since my last post.  I left Berlin one mockingly beautiful and serene evening on an overnight train to Vienna.  In the following weeks I travelled through Austria and then Italy, sometimes thinking about what I wanted to  do in my life, mostly thinking about the wonderful places I was seeing, and enjoying the hilarious, cathartic, entertaining, and sometimes stressful-but-will-make-good-stories-later situations I was getting into.  I met some truly lovely people, and I also met my fair share of creepy ones and lonely ones and everything else on the spectrum.  My emotions were pretty wide ranging as well; from being smug and delightedly content when a wrong bus landed me in the heavy vined vinyards outside Vienna on a burnished autumnal afternoon, to sobbing in a hostel in Florence after 24 hours of travel delays and mosquito bites.  I like the immediacy of problems when you travel, chances are they will be fixed one way or another in short space of time – the wheel of fortune spins faster than usual, bedbugs and calamity in one city aren’t far from sunsets and good wine in the next.  Things change fast.

I called things a day in Venice and decided to go back to the UK to regroup and attempt to make a more solid plan for the future while my account still had enough money for this to be a reasonable possibility ie. enough to be able to move somewhere if I got an enticing job, or at least a good starting fund if I decided on further travels.  I also wanted to absorb all the activity from the past few months, write up my adventures, send emails, edit my photos, make drawings and think it out while hopefully topping up the funds.

Then.  My dad picked me up from the airport.

My mum has cancer.

I’m still processing this so I don’t have a lot to say about it right now, but I suspect that I will and I know that writing about it will help me (especially since in terms of actual talking I can barely open my mouth at the moment).

So.  In the next few weeks I will be writing about: travel, being a struggling young person – specifically some more thoughts on this post:  https://beautifullittlefool89.wordpress.com/2013/06/22/10-things-i-have-learnt-since-finishing-university-in-2011/  as it got a lot of responses (keep them coming guys, I like to hear from you!) hopefully some drawings, although I might post these on my portfolio page and . . . cancer.  Maybe.