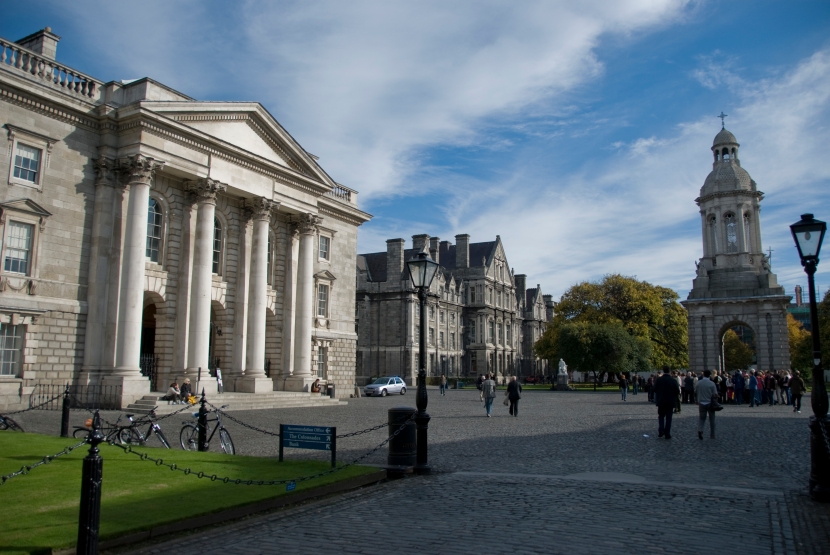 ‘Things turned fairly serious, even for us, with the approach of finals – from which —– warned us, we would never quite recover. He proved right except that it wasn’t finals themselves that were traumatic so much as leaving Trinity, which had become, for so many of us, a home from home.’ Derek Mahon on my alma mater – Trinity College Dublin

It’s that time of year again; so I thought this would be a good time for me to reflect on life outside the bubble of academia.  This post is going to be a lot more personal than what I usually talk about here, but I thought some recent graduates might appreciate hearing about my experiences just to know that – yes, things are tough at the moment, but you aren’t alone.  I would love to say that these early years of my ‘real’ adult life have been filled with excitement, adventure and new opportunities, but in reality the two years since finishing university have been the most difficult of my life.  I made a lot of mistakes, and undoubtedly suffered from a few circumstances beyond my control, but I’m finally starting to think that things (just about) look ok again, so what have I learnt?

To conclude I will say that it has been a rough road, but I am in a much better position than I was two years ago, and about to head off on a tangent I never would have considered back then.  In an ideal world I would have liked to have stayed in Dublin, got a full time job there and watch things improve – but this never happened.  To a new graduate I would say:  The economy and the figures might be against you but do persevere, seek help when you need it – and try to recognise an opportunity when it arises, even if it is not what you imagined.  Good luck!

7th November 2013:  Following the responses I have been getting to this post I have written an update which can be viewed here

Happy Bloomsday everyone!  As you know I went to university in Dublin, and today is a rather important date in Dublin’s calendar as 16th June 1904 was when the events of James Joyce’s most famous creation ‘Ulysses’ took place.  ‘Bloomsday’ gets it’s name from the protagonist of the novel, Leopold Bloom, who takes an epic journey around Dublin mimicking Homer’s Odyssey.  In real life 16th June was the day that James Joyce met his wife Nora Barnacle.  Unfortunately I’m not apt to give a great summary of Ulysses because I have not read it (!) and I’m not a huge fan of Joyce or modernism in general.  Unsurprisingly I had no particular wish to take a term long course on Ulysses where a chapter was painstakingly picked apart each week.  I’d consider that a slow death indeed, although plenty of people thought this was pretty much the pinnacle of their Dublin English degree experience.  Let’s just say my time for Joycean enjoyment has not yet arrived, maybe I’ll think Ulysses is the greatest thing ever in 20 years time.  Maybe.  In which case I’ll regret my time spent as a literature student in Dublin dilly dallying with other literary greats and  cringing every time an extract from Finnegan’s Wake or a story from Dubliner’s would appear on a reading list.  As an addendum to this I would like to add, incidentally, that I have read James Joyce’s love letters to Nora Barnacle (or rather, I had them read to me by a significant other who thought this was highly amusing) – and I can certainly vouch for their entertainment value, as much as they are in the literary gutter 😉

Anyway, I digress.  ‘Before Sunrise’ directed by Richard Linklater is a film which takes place on the 16th June, and it is peppered with references to Ulysses.  While on a train from Budapest American student Jesse (Ethan Hawke) meets Celine (Julie Delpy) on her way to Paris, and he talks her into getting off the train in Vienna to explore the city with him.  The pair wander around the city as it begins to get dark and have a series of encounters with the locals.  Over the course of the evening as the sun begins to set the pair get to know each other better and become close, gradually ending up in a park before they have to part at sunrise so that Jesse can catch his flight home.  They vow to meet again at the train station in six months time, but do not exchange phone numbers or contact details.  I was just about to watch this film again because I have been thinking a lot of my own summer travels.  I would like to say ‘impending’ summer travels, but they still seem so far away . . . in reality, 7 weeks, depending on my work situation (unstable).  I know that rationally speaking 7 weeks is nothing, but it might as well be 7 years – it seems like an eternity.  I am going to Berlin for the long term, but I am planning several weeks of pre-Berlin travel with an open schedule.  I would dearly love to go to Vienna, where this film is set, so it seemed like an appropriate teaser.  I will also probably be travelling by train, so again this is a good film for stirring my imagination.  Obviously ‘Before Sunrise’ is your ideal interrailing scenario.  Meet an attractive foreigner on the train, get off in an appropriately romantic European city in the summertime, and let the adventure begin.

It is pure coincidence that I have decided to watch this film today of all days, in a weird and tenuous way I feel like my past (Dublin) and imminent future (trains, Europe, Vienna?) have come together here.  Both stories involve exploring a city (Dublin/Vienna) over the 16th/17th of June.  Both involve visits to a graveyard.  Jesse’s real name is James and, like Joyce, he spent a long time wandering around Europe.  I suspect there may be a few more links, but as I haven’t read the book and I’ve just lifted these facts from IMDb – you’ll have to spot them on your own.

For those of you in Dublin, or otherwise Ulysses enthusiasts I hope you enjoyed your day and celebrated appropriately!