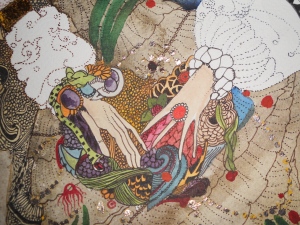 A detail from my copy of ‘The Garden of Paradise’

Harry Clarke was a Dublin born illustrator and stained glass artist. During his short life (1889-1931) he produced illustrations for Edgar Allen Poe’s stories and Goethe’s Faust amongst other things. An example of the intricacy and detail of the work of the Arts and Crafts movement, his work also bears similarities to contemporary illustrators Aubrey Beardsley and Kay Nielson. The maddeningly intricate patterns, which I’ve spent many an hour copying, also remind me a lot of Gustav Klimt.

My first encounter with Harry Clarke was standing in front of one of his famous stained glass windows at the Hugh Lane Gallery in Dublin. At that point I was a little first year History of Art student, and even though I was impressed I had other things on my first year mind – I forgot about Harry Clarke. Several years later the National Gallery of Ireland hosted an exhibition of Harry Clarke’s illustrations for Hans Christian Anderson’s ‘Fairy Tales’, and this time, I was hooked. I’m not sure exactly what it was that first made me pick up my paintbrush and decide to have a go at copying a Harry Clarke, but it’s certainly been an interesting ride and undoubtedly a sharp learning curve. 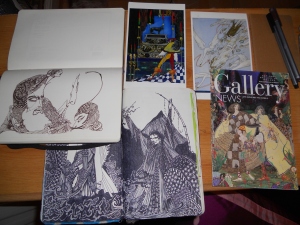 I don’t know what your opinions are on copying things, but while studying art at college we were always encouraged to copy paintings and drawings as part of the creative process. The thinking on this probably lies somewhere along the lines that you should learn the rules before you can break them. It’s astonishing how much you can learn about an artist’s technique by trying to recreate one of their drawings, and more than anything else it’s just a good technical exercise. From that point onwards we were supposed to try to create our own work in the style of that artist, do this enough times and with enough artists and you might eventually be able to find your own groove. I suppose there are a lucky few people out there who already know their own style, the rest of us have to find it through trial and error.

I digress; I like copying Harry Clarke illustrations because it’s therapeutic. When trying to create your own original piece of work your mind is constantly whirring and questioning every line and every colour choice, but with copies my mind can wander. In short, this is just what I’m doing to clear out my head; my real creative juices are getting poured into other things. Recently I’ve been thinking about maybe doing my own set of illustrations for something in the style of Harry Clarke. This would require quite a lot of planning as of course I’d like to get it right, I’m sure it would be a good challenge though – maybe a project for the new year.