After sewing on the markers the next thing I did was carefully remove the pattern.  If you want to save it or think you might want to pass it on to someone else at some point then try hard not to tear it.  After that I did some tacking – large loose stitches to act as guide when it comes to sewing.  Again, chalk or pencil lines are ok for this as well but tacking is preferable because it helps to hold the material in place.  You could also use pins and remove them as you start to sew, but this can get a bit fiddly. 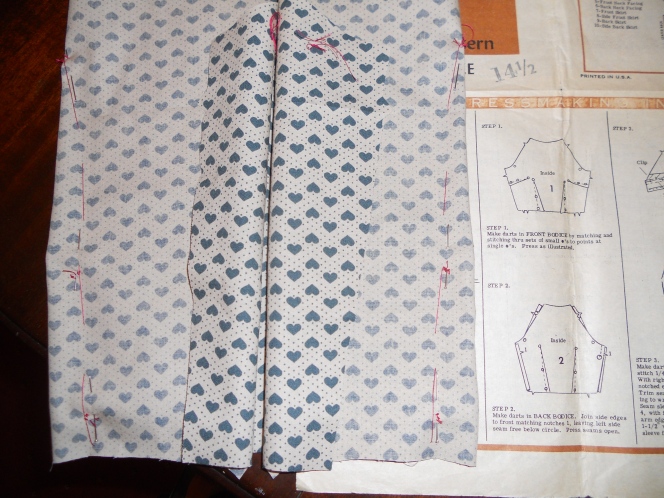 Tacking in pink thread, next to my instructions!

Tacking is quite good because the material starts to take shape, and you begin to get a vague idea of where you’re heading.  The next thing I did was to cut out and iron on facing (a stiff material which helps to give structure).  I only needed to do this for a few bits which will go around the collar/sleeves.

And finally I got to do some actually sewing with my new new sewing machine!  I sewed along the lines I had made with the pink thread and was very pleased with the result.  It is starting to look a bit more like an item clothing now which is good.  I carefully removed the pink thread, and this is the point I am up to now: 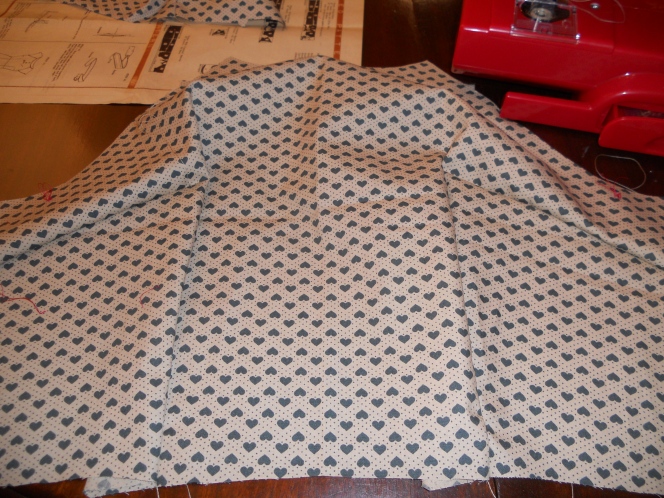 More to follow – I’m excited for the jigsaw to start coming together!

So for Christmas I got a very lovely red sewing machine and I have been wracking my brains over what my first project on it should be. Aside from some tinkering at school and at home I have never really used a sewing machine so I don’t really have any idea what I’m doing.  However, momentarily determined to tap into my inner 50s housewife, I am going to learn!  For my first project I have chosen a relatively (I hope) simple looking dress from a large collection of old patterns we have at home.  As this is going to be a ‘trial’ project getting to grips with my new sewing machine I didn’t want to spend money on a new pattern as they can be quite expensive and I would be doubly frustrated if (and when) I screw up.

Task number one was to locate some nice and appropriate material, I wanted to use cotton rather than anything elasticated or chiffon-ie in order to keep things simple.  Material is actually quite a lot more expensive than I thought it would be which makes me a little sad.  Depending on what sort of project you are working on then it is possible to buy offcuts and end of role material more cheaply, but this won’t always be suitable.  Making your own clothes is far less cost effective than it was back in the day, and once you’ve bought a pattern and some nice material chances are that you have already spent more than you would have done on a dress – and you still have to put the damn thing together!  In short, making your own clothes is a labour of love and in this case – no doubt – a sharp learning curve. 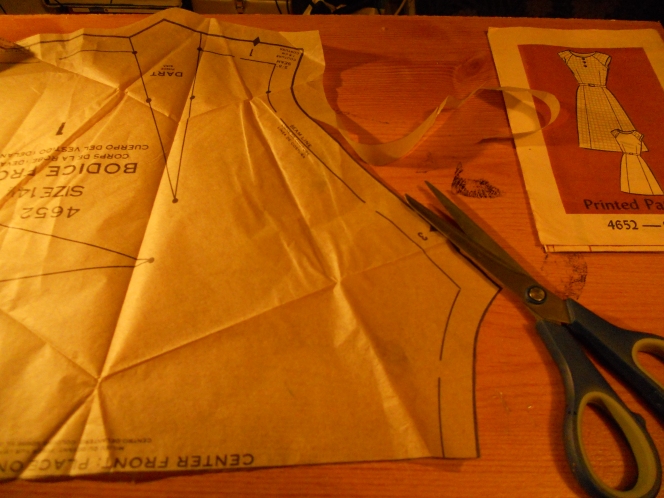 Cutting out the pattern

I’m still in the ‘prep’ stages and haven’t yet started any sewing.  Here are the things that I have done so far:

1. Cut out the pattern.  You might notice that unlike modern patterns this one only comes in one size (which incidentally happens to be too big for me – but not an issue for a practice dress).

2. Press the pattern with a low heat iron so that it will lie flat on the material

3. Pin the pattern to the material according to the layout on the instructions.  It is important the lines with arrows in the middle of the pattern lie exactly parallel with fold in the fabric.  This is so that the pattern looks right/goes in the correct direction when you sew everything together.  I guess this is probably less important when you have plain fabric and you can just lay out your pattern in the most economic way.

4. Cut the fabric, which in this case was done rather badly.  I generally have quite a steady hand but as I’m not used to cutting fabric yet I made a bit of a mess of it.  However, these badly cut edges of course won’t be seen once I begin to sew the pieces together.  I suspect there will be some not necessarily neat sewing to follow though. 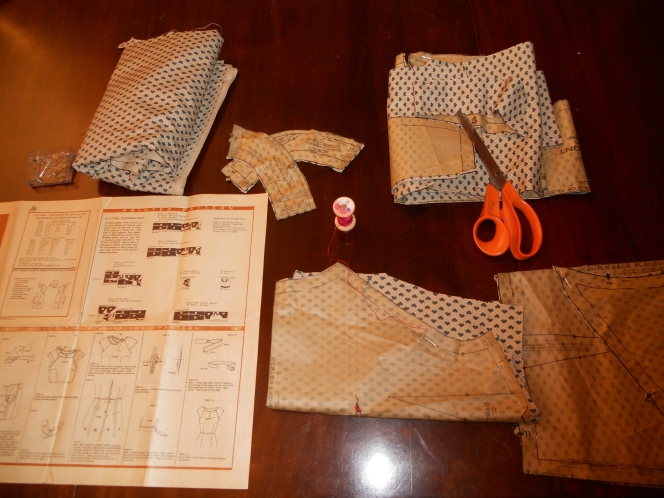 5. Sew markers on the dots of the darts in contrasting thread, making sure that the cotton goes through both layers of fabric.  You can also use pencil or chalk to mark the dots.

And that’s where I’m up to so far.  I’m a little bit nervous to start the sewing as I really have no idea what I’m doing.  If anything goes seriously wrong then I do have plenty of spare material but I’m hoping for the best, I’m not greatly troubled by mistakes at this stage.